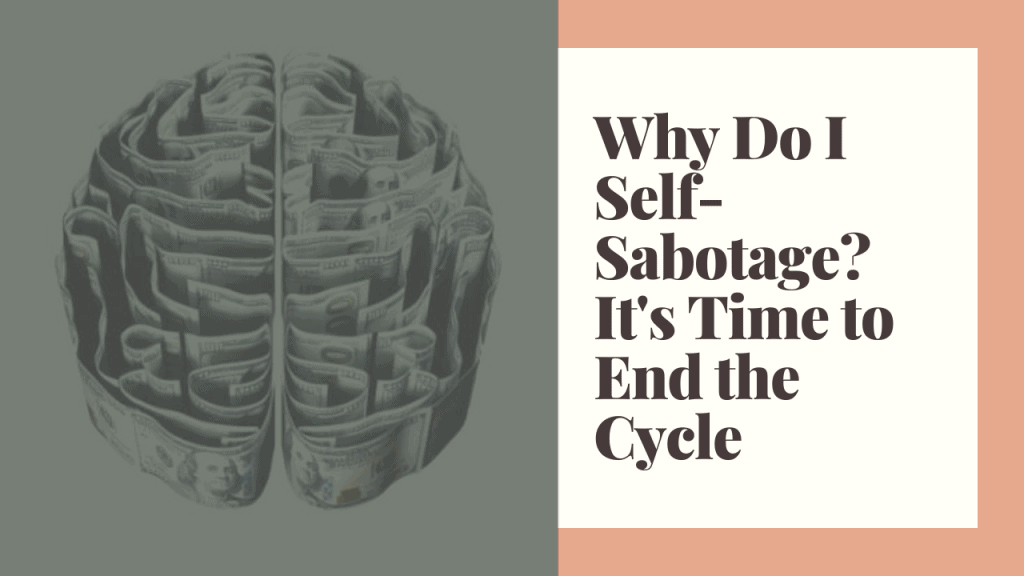 Why Do I Self-Sabotage? It’s Time to Break the Cycle

“Why do I self-sabotage?”

Whether you’re constantly procrastinating at work, ruining a good relationship for the millionth time, or you just can’t stick to a fitness program – there’s nothing quite as brutal as fucking things up for yourself. And honestly, we all do it. Self-sabotage is quintessentially human.

But any and every self-sabotaging behaviour can be overcome with three things. The desire to change, the understanding of why it’s happening and the right therapeutic tools.

Self-awareness doesn’t equal healing, but healing doesn’t happen without it. So the first step in removing and preventing self-sabotage is understanding why you do it.

This post will help you fully conceptualise the specific drivers of self-sabotage and firmly set you on your path to freedom from that cycle.

So Generally Speaking, Why Do We Self-Sabotage?

Before we get into the specifics, you need to understand the overarching idea that any and every self-sabotaging behaviour is meeting a need. It has a positive intention and serves a specific purpose – in-built to aid our survival.

Remember, threats don’t just take the shape of saber-toothed tigers but anything that endangers our ability to thrive in a group.

And “good stuff” comes in the form of anything that makes us feel loved, important and certain – our basic emotional needs that underpin all human behaviour.

Our map of the world, beliefs and behaviours that meet these needs (to a reasonable standard) are solidified at an extremely young age.

So, self-sabotage is driven primarily by limiting beliefs, and these behaviours will help you live a future that’s a carbon copy of your past.

Why? Well you downloaded your programs primarily from your parents – they were (in evolutionary terms) “successful” because they:

Following in their shoes, your programs have kept you alive so far. Right?

So, as mother nature understands, if you just keep doing what you’ve always done (much of which your parents did) you’ll have good chances of survival. Evolution can’t separate what helped and hindered that success.

Incongruence – and therefore self-sabotage – happens when our programs don’t support what we want consciously. When the conscious brain wants something that the unconscious isn’t aligned with.

In a nutshell, that’s it. So let’s get into the meat of it!

Naturally there is overlap and a million different flavours and tones that self-sabotage can manifest.

You’re reaffirming a negative belief (specifically around your identity or map of the world) and creating a self-fulfilling prophecy.

We tell ourselves stories about who we are and about how the world works. And self-sabotage is very closely related to our self-esteem.

A few years ago I held a belief – “people don’t listen to me”. When me and my partner Dan would argue I would press on and on and on until he stopped listening to what I had to say. The second he would stop responding to what I’d specifically said (while infuriating me nonetheless) I had evidence for my belief.

There is a strange comfort in reaffirming what we believe to be true, even if it’s not something we want.

I’d also cooly ignore him listening to me for 10 minutes straight because it contradicted my belief. I was a real treat right?

Daft (and embarrassing) an example I know, but it does demonstrate how we delete, distort and generalise the information around us to fit in with what we believe.

If you hold a belief it HAS to show up in your universe or you’d think you were losing your fucking mind.

Maybe you believe you’re unworthy of a loving relationship, or you “don’t work hard enough to deserve success” or you’re not good enough for xyz, the list goes onnnn and onnnn.

If your beliefs don’t support the life you want – self-sabotage is inexorable.

Maybe it’s more about the likelihood of success. If you don’t believe that you’ll succeed, self-sabotage can characteristically stomp it’s way into the spotlight like the attention seeking little shit it is.

Even if the unconscious mind is highly motivated. Even if the goal is attractive and desirable.

If you don’t believe that you’ll land your dream job because there aren’t any job vacancies right now/you’re under-qualified/whatever story you tell yourself – then why bother looking for jobs? Completing applications? Networking? At best you’ll half arse it, and get this – NOT LAND YOUR DREAM JOB. Ta da! Self-fulfilling prophecy.

Beliefs don’t just stay in your head, they create your reality.

You have a negative association or belief around succeeding.

These are classic examples of a parts conflict. Where separate parts of your neurology and psyche want different things and can’t co-exist peacefully.

If you’re not completely on board with what you want, self-sabotage will stop you from getting it.

Imposter syndrome has its place here too. Imposter syndrome is simply believing that results you get are due to chance. So, along with succeeding may lie the concern that people would figure out that you’re a “fraud”.

There could be any number of unwanted side effects associated with success that are niggling away in your subconscious mind. This is why it’s so incredibly important to be fully honest with yourself about what you want.

If you grew up in a similar way to me, you might find it almost taboo to say something negative about your goal. But, if it’s not weeded out from the unconscious mind and addressed – it could be wreaking havoc when your conscious attention is elsewhere.

You have a negative belief associated with failing (and are avoiding reaffirming that belief to protect the ego).

Self-sabotage happens when our fear of a threat is greater than our desire to succeed – and there’s little in life as paralysing as fear of failure.

Even a little whiff of vulnerability can set off a million warning lights in our fragile human brains.

If you didn’t study for your degree and didn’t get good results, the ego can rest easy in the understanding that the reason was because you didn’t try hard enough, not because you’re “stupid”.

A failed relationship is easier to stomach if you didn’t let your walls down. If you don’t go all in in the first place then they can’t reject the real you.

If “failure” would be emotionally catastrophic for you, it’s easier to:

When we hold negative beliefs about ourselves that are just too big and scary to face, we avoid anything that might provide evidence for them all together.

It’s the human equivalent of a guilty dog refusing to look at the pillow it’s destroyed.

4. Fear of the Unknown

You’re prioritising your need for certainty and control above your other needs.

Take relationships, often we’ll unconsciously illicit a particular negative behaviour from a person because it’s familiar. Familiarity feels safe – even if it’s not, just because we’ve experienced it before.

You might keep choosing similar partners that aren’t willing or able to give you the relationship you want because it’s a known tried and tested dynamic for you.

We’re in control when press play on our self-sabotaging behaviour patterns, we risk living in uncharted territory when we leap into the unknown (insert Frozen joke here).

You’re prioritising short term gratification – this could be a negative association with the process or driven by a belief around the difficulty/amount of effort needed.

The unconscious mind loves short term gratification. Like totally craves it. It’s effectively a seven year old that tears through an advent calendar in one swoop because it just can’t wait.

And unfortunately, working on what we want most often means sacrificing needs in the short term.

If you want to get healthy, you’ll have to give up the mac and cheese and replace comforting Netflix binges with uncomfortable workouts. Even if the end result would meet your needs – there are only 24 hours in a day.

So, if a behaviour doesn’t fill you up with good feelings then it’s taking time and energy away from behaviours that would.

The unconscious mind is a computer that’s addicted to feeling loved, important, and in control, and it’s constantly calculating how to best get you there.

It considers what you would lose by doing the behaviours you’d need to do to succeed (side note – this is why if you ever want to stop doing a particular behaviour, you need to replace it with something else).

So, it’s no surprise that a big reason that we avoid the behaviours that would ultimately lead to what we want is simply that they’re too hard, big or unenjoyable.

Maybe you straight up don’t want to do it.

Reaching olympian standards of health and function? Of course I want that. Actually committing to the Wim Hof method and enduing cold showers every morning? Hell no!!

Similarly, if a project is framed in a way that makes it seem too big (and therefore emotional payoff feels like a million miles away), the unconscious mind might prioritise more efficient ways to meet your needs.

To put it into biological terms – we get dopamine hits from completing small tasks and serotonin hits when we reach the bigger accomplishments.

So, if your to-do list consists of items like “create course” then it might be challenging to convince the unconscious mind to chip away at it one word at a time. If it doesn’t get the feel good feelings along the way, wheres the motivation?

When trying to figure out where self-sabotage is coming from, the most important thing to remember is that the behaviour is serving you in some way. With that in mind, try to be really honest with yourself.

What good comes from your self-sabotaging behaviour? Let go of judgement – it was a program developed to help you survive.

Every single thing I’ve mentioned in this article is a real world example and absolutely everything can be resolved. No one is ever beyond hope and nothing is ever so deeply in-built that it can’t be unravelled.

If your unconscious (or even conscious) behaviours are ruining your life – I can help. I’ve unwired countless deep-rooted sabotaging programs both for myself and my clients, removing the self-sabotaging cycle from existence.

So, if you find yourself saying “why do I keep doing this?” or “why does this keep happening to me?” or “why can’t I just stop self-sabotaging?!?!?”, drop me an email – I’d love to help you overcome your self-sabotage.